There are many many pages and history of the breeds early history, most articles are talking only about the old history of how the breed came to exist and how it got its name. In this article, I will talk a bit more about the foundation of our breed and when and how the clones came into existence.

Just as we a couple of years ago still could get the moggies from Sweden recognized as a European Shorthair, it’s still possible to find a cat who got all the characteristics of a Maine Coon and get that one registered as a Maine coon in the USA. Of course, if they do not have a pedigree they are just domestic cats as same as for all not registered cats, but we do have the possibility to register cats as a new foundation to get new blood into our breed.

But I will not go further in on that subject, on PawPeds there is a list over the early foundation cats, and also some new foundation with later dates is on that list, but most of them are the early first foundation.
FoundationCatList

I have also got the understanding that many breeders in Sweden today and possibly rest of Europe, do not know that much about the clones, and not really understand their impact on our breed. Many talks about the clones (now remember they were nothing more then 17 siblings), as if they were the founders of our breed, which is far from correct.

They were just a piece of a big cake with many, many different pieces and the clones themselves when they where born, was just a little piece of this giant cake of different lines. I also heard it said: Behind the more “extreme” cats is the cats from Heidi Ho’s lines, clones (offsprings of Heidi Ho Sonkey Bill and Tanstaafl Polly Adeline of Heidi Ho).

As if those cats would have some impact of that extreme type that many MCO got today.
The thing is that those more extreme type cat, that so many today suggests is the “correct” type, is far, far from the type that the clones actually had. So to have high values of the clones does not have anything to do with the type, this is nothing more than a huge bottleneck which has reduced the genetic variation in those cats a lot.

To understand more about the impact they had on the breed and understand more about who they really were, we have to go back a good part in time. Back to the time before the clones were born. It seems like many have not understood that the clones, in fact, were what we today call F4. Foundation in 4:th generation. I will put a link to their pedigree further down the document. But first… how it all began!

1969 Connie Condit (Heidi Ho) thought in a army nursing school. At the student home was a pregnant homeless little brown mackerel tabby female moving around, they gave her the name Susan.
This little female did not qualified to be a Maine Coon, she looked according to Connie Condit, like the Kliban-sneaker cat but without shoes… this female got to move in with Connie.

Picture below of the Kliban-Sneaker-cat. 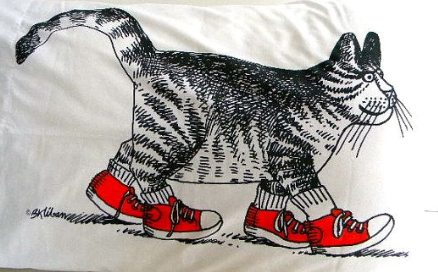 When he was 6 months old Connie met Bonnie Rich (Richelieu), who went bonkers over Andy and insisted that Connie must register him, show him and breed him. Connie did thought she was nuts, considering his mother and unknown father, but Bonnie explained the process of foundation-registration to Connie and just to get her to shut up, Connie did write to ACA and got him registered.
After a vacation in Florida, Bonnie had a date with her to Andy, a female named Bridget (Bridget Katt of Heidi Ho). Connie still had no intentions getting into breeding, but did join MCBFA (Maine Coon Breeders and Fanciers Association) to learn a bit more about Maine Coon. There she got in contact with Betty Ljostad who suggested that she would take Andy to a show, to let the judges decide whether he was a Maine Coon. He came home a Champion. Bridget was then already pregnant.

This was made to inbreed them and sort out possible bad genes, here we have to consider, that at this time the thought was different about inbreeding, this was thought to be the best way to clean out bad genes, that in this way you forced the bad recessives genes out into the light. Well, today we do know better, but at this time this was how it was done. One of the more famous breedings she did was the one with Henrietta who was the daughter of Heidi Ho Heather and Heidi Ho Henry Sayward, where she mate her to her father, in this litter was Heidi Ho Sonkey Bill born, who is the father of the clones.

After Connie got Heidi Ho Sonkey Bill after Henrietta and Henry, she neutered all the 5 earlier cats Henry, Seth, Fanny  Abigail, Molly Stark, and Heather.

She had then already bought in two new, Tanstaafl Polly Adelaine and also Ktaadin Oquossoc.
To do some line breeding and here the story we all so well know begins. The one about the clones.

Connie realized that this mating between Henrietta och Henry, was a risk, but a risk she was willing to take. She had been living in German for a long time and did not know any breeders with males she could think of using, Henrietta was already 2 years old and in need of being mated. She had also kept Becky (Heidi Ho Rebecca Katt) a female from Seth Parker and Polly Adelaine to continue Seth's genes.

As you can see above it was a lot of inbreeding and as said before, this was something you did at this time, believing that you this way sorted out bad recessive genes.

Andys nose break was a bit too much, Connie corrected this by mating him to Bridget.
After this, she mated him to Polly  Adeline and the rest is history.

The first litter was born 1979-01-20, I do not know if only one was born in this litter or if this is the only one did end up in PawPeds, but in this litter was:
Heidi Ho Barnaby Katt.
1979-07-01 a new litter arrived between those two also in this is just one registered in PawPeds who went into breeding:
Heidi Ho Percival of Meunderie.

1979-10-19 next litter came in this there were two offsprings who got into breeding:

These 17 siblings we call the clones became extremely popular and was used to much a lot too much.

They became what we today call marathon-males and marathon-females (maybe this is a Swedish expression for overused males and females?) and you continued to inbreed even more to make them even stronger genetically.

Why they are called the clones is in another shorter article called About the Clones.

Some thoughtful words from Connie herself are:
I've never understood why people say they like a certain breed and then set out to change the first one thing, then another. Years ago, a beginning breeder wrote to me for advice on her breeding program. She asked, "What do the judges like?" My reply was very blunt: to H*** with what the judges like; breed to the standard! When I first started, very few judges knew a good Maine Coon when they fell over one!"

Other thoughtful words from Connie today when we do have so many cats with so high percentage on the clones in their pedigrees (often 35-45%) is:

The people who bred with clones would have done better to breed with good Maine Coon-type foundation cats to widen the gene pool.
I was not totally pleased with the way the clones matured; they were too lean and lanky and at least part of them was too fine-boned. They should have been bred to more outcrossed lines.

Right now, there is too much Heidi Ho in most lines; we need new blood transfusions.

Above is so the history of the becoming of the clones and the background to them, where they came from and the fact, they actually were foundation cats. Something you might take into consideration, before you give in to the urge to speak derogatory, about those who are today working with foundation cats,  and outcross. You should also consider Connie's own words, maybe also respect her wish. Without Connie those cats would have never existed, so by working with outcross myself, I feel that I honor her by fulfilling her wish by working with outcross and mix in some new blood in my breeding.

If you create an account on Pawpeds you can choose to mark double, which is a big help if you want to see more clearly what inbreeding there is in a pedigree behind the clones and also after the clones.

Here is one of the clones pedigree in 6 generations. If you do seek and count the number of hits if you search for Andy Katt and Bridget Katt in 6 generations you can see that you get 7 hits on Andy and 6 hits on Bridget. If you would stumble on a cat with this composition today would you for a second consider using this cat in your breeding? I guess most of you would not.
Heidi Ho Aurora

Most of you would really not do this, despite this so many continue to use very high cloned cats in their breeding, without really knowing what this actually means for the breed.

Today the clones are unfourtnantly so far back in the pedigrees that it’s hard for people to visually see them and see the actual impact of them, all we can see is a percentage, who most of us have trouble really understand the impact of. In most of the cats today the clones are further back then 10 generations and we can thereby not physically actually see them in our pedigrees, this makes them a bit unreal.
I fully understand that it’s hard to really understand the impact of those cats so far back in our pedigrees, but if we consider that nothing has changed, just because they are moved further back, it’s still the same amount of cats there, we just can’t see them anymore.
Let's use one of my old boys as an example, he was born in 2006 and did not had those sky-high percentage on the clones that many have today he was about 35%, but in his pedigree, you can actually do an experiment to see a bit more clearly how it actually is behind the cats who got higher values on the clones.

Click on the link, Google Chrom is to prefer, press CTRL-F to get the search box to appear up in the right corner. Then search for Heidi Ho Aurora (who was one of the clones), consider this is just ONE of them and there are actually 17 of them. If you want to experiment do a search for the other 17 also.
But searching for Heidi Ho Aurora on my Lilleman will show that in 10 generations, she appears 86 times!
Lilleman

As a closure, since I have been talking a whole lot of the clones, about their history and how they got to be so popular and common, do not forget that those cats were not the founders of the breed!
They were just a small, small part of all the many, many, many other cats that actually where the foundation of our breed.

Below are some pictures of the cats I have been talking about above, they are all published in PawPeds in the pedigree and also on MCHS.  Click on the pictures to get to the source of the picture and also to see more pictures in some cases.