At the same time, Debbie was doing her collection of data for her article, I was in the middle of collecting data for another one.
I wanted to have a look at how HD will affect the offsprings if there is HD present in the closest 5 generations. We know that the health program works and that HD diminishes when we continue to test generation after generation. But most research I have seen been focusing on cats and in some articles their parents but I have never seen a study made on 5 generations.
I will not speculate on where we are going, the only thing I've done in this article is to collect the data and put it in charts so that we can easily see what it looks like today and maybe get another hint on where to go next.

I took all cats that were tested inside the health program, then I started to look them up in PawPeds I counted the number of tested cats for each generation behind...
For example 2, 2, 2, 4, 6 (one column in an excel for each generation), I set up a calculation that calculated the total amount of cats in 5 generations (62) and made a count of how many percentages of those 5 generations where tested.

If there were any cats in the first 5 generations that had HD, I also noted in which generation and how many.

I was quite surprised to realize that the absolute highest amount of tested cats in any cat in the health program where only 79%, I actually had expected to find at least one cat with 100% tested cats in 5 generations, but that was not the case. Now, I do know there might be more tested cats for example with OFA, in fact, I did know for sure in some cases.

At first, I did a comparison against how many cats there were tested behind each cat, In this graph, I did take into consideration what generations or anything like that.
In the first group, you can see the cats in the percentage who were 1st generation tested cats themselves, there was not a single HD-test behind those cats.
In the second group, you will see the cats who got 50% up to 79% tested cats in five generations, as you can see there is quite a difference between those two groups.
Cats with normal hips are about 20% higher in the group with 50% or more tested cats behind, compared to the cats with 0% tested background.

Here we can see that the difference is not that big anymore those with Normal hips are almost the same, normal are a bit lower on the cats with 50-79% tested behind,
also HD grade 1 is a bit higher, but both HD grade 2 and 3 are lower than in those cats with 0-49% tested cats behind. 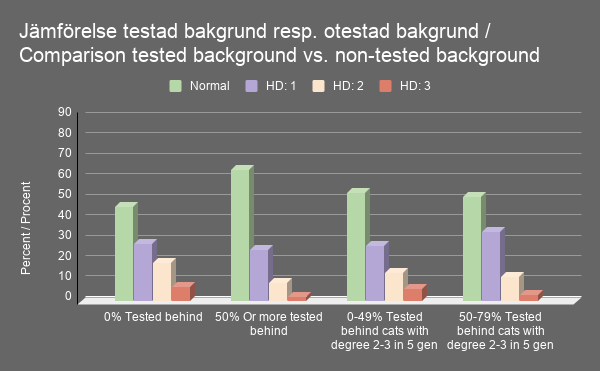 In the next graph, I made a deeper study on the cats that had HD behind them against those who did not have any known cats with HD behind them.
I did not take into consideration if there was one or more, only if there were HD 2 or 3 behind in any generation. 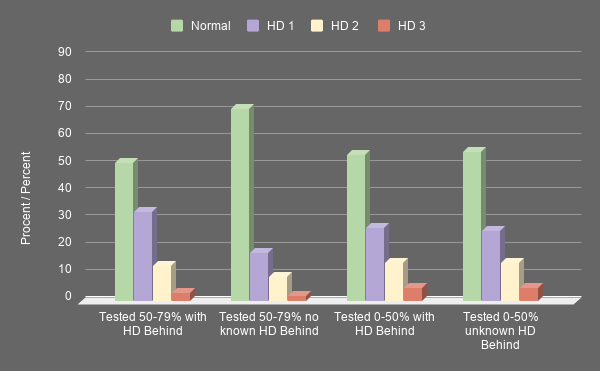 It seems like the closer it is the worse HD, for some reason the HD grade 3 is less in the cats who had ancestors with HD degree 2 or 3 for the first time in 2nd generation.
That might be just a coincidence, maybe the grandparents were first-generation tested. I might have to dig a bit deeper into this if possible.

This is what I found out, as we can see there is some variation, this migh have to do with how close the HD is or other factors? 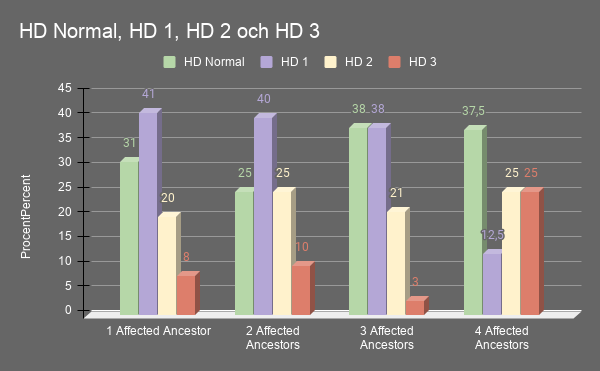 How many in each category had normal, grade 1, 2, or 3 compared to all other cats tested. The result in the chart below is in percent and calculated from all 696 cats in the health program who did have affected ancestors to some degree behind them in 5 generations. 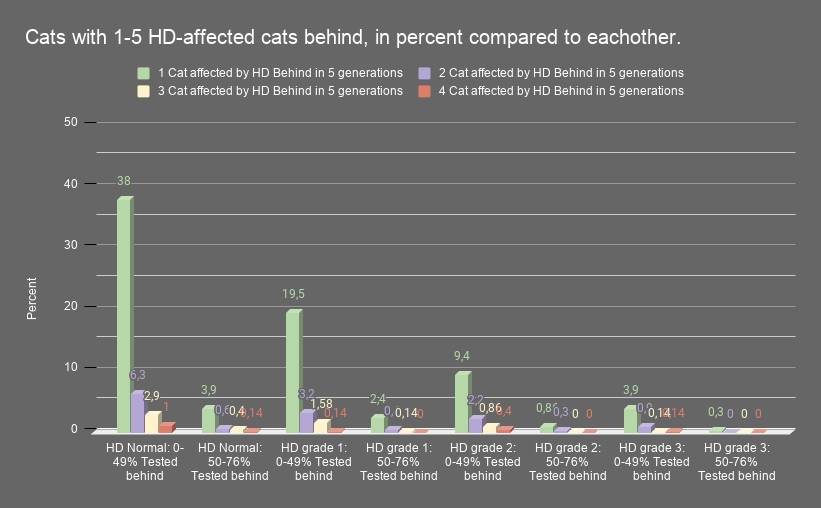 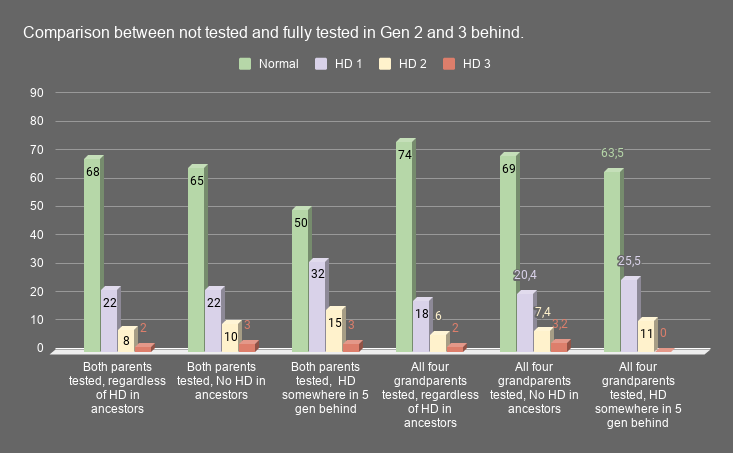